Absent women who should have been present.

An African country crossed by political problems. A revolutionary student dad who is forced to leave his own house to avoid persecutions. A mum and his daughters who see him leaving. These are the elements which led to the diaspora of Leontines’s family: they found themselves in Africa and then lost when crossing the border with Libia. The two little girls leave alone towards Italy and they are now separated as they live in reception facilities which are in two different cities in Italy.

An interconnection of calls between the parents, who reunited by themselves, the Cooperatives, that host the members of the family, and the different competence Prefecture starts. Progetto Itaca, that hosts Leontine and two of her daughters, succeeds in completing family reunification with her adolescent daughter who lived in a CAS in Calabria. In the meanwhile, the dad gains humanitarian protection and heads Lecco to be nearer to his family.

Following reception guidelines, the household is addressed to live in a flat and, with the cooperation of Coop L’Arcobaleno in Lecco, the reunification with the daughter living in a CAS in Trento is accomplished.

Women, young women and little girls face everyday a journey “towards a better future”. They deal with hardships and with moments of discouragement, until they receive help; until cooperation is created and a family is reunited.

One daughter is still missing. She lives in Africa with her uncle and we hope she could soon come here in Italy to start going to school and to live with her parents and her sisters.

During the last two years, the phenomenon of migratory flow feminisation has reached important numbers; suffice it to say that in Italy the number of women who ask for protection has doubled between 2015 and 2016 and worldwide, according to UNHCR, women represent the 50% of refugees. 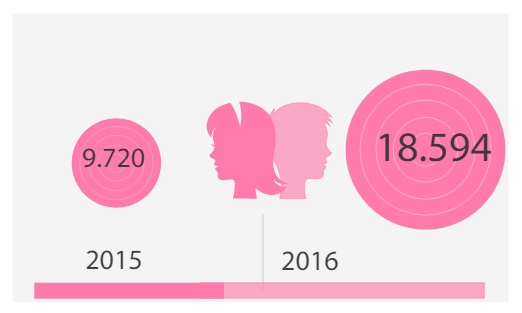 This female migratory flow has social, economic and psychological implications which belong typically to women. In fact, among the reasons that force people to leave their own country, some specifically belong to women like sexual abuses, genital mutilations and forced marriages.

We are really worried about the high rate of people victims of sexual and genre abuses like sexual assaults, forced prostitution, genital mutilation, early marriages and domestic abuses. ~ UNHCR

It is therefore necessary to pay attention to potential victims of trafficking to recognize and protect them. In Italy, to strengthen protection system, there’s the 93/2013 DL which allows foreign women to avoid violent situations by joining a protection programme. It gives women a new residence permit for humanitarian reasons as victims of violence, as introduced by art. 18 bis of Testo Unico sull’Immigrazione.

To completely realize the situation, we could think to the fact that many women leave their country during pregnancy because, in this case, the risk of becoming a victim of violence while crossing Libya decreases.

In Progetto Itaca we help women to be fully informed about how to protect themselves and we support them during their choices. We are constantly in touch with Anti-Trafficking project, firstly to allow victims identification and secondly to support them while joining the protection programme.

While speaking with them we must understand that we can’t see their stories with our eyes and that they can’t imagine our reality with theirs!
Their idea of violence seems to be different from ours, and the same happens for the conception of the right. Family dynamics they faced, influence their relationship with men and so, after marriage, the husband dominates the house and the wife becomes submissive. 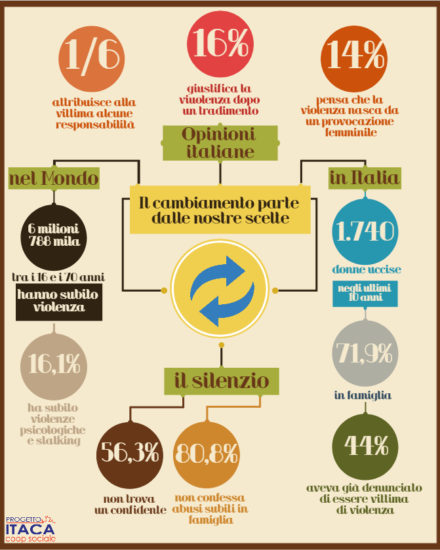 We all know that the place where acts of violence are most common is house and that perpetrators of the violence are usually people we love. We know about it because almost every day tv news report about physically and psychologically abused women; we know about it from ISTAT statistics that assert that almost 7 million women have been victims of violence during their life; we know about it from Ansa, that informs us that in the last 10 years the number of women who have been killed in Italy is 1740. 71,9% of these women have been killed by a member of their family.

To change this shameful reality of facts there must be a change of mentality, the problem needs to be perceived as a problem by society. In fact, this is a cultural issue and so we should deal with it starting from schools. Schools should provide an education based on feelings and empathy, starting from children, to remove the stereotype of the man seen as a hunter and the woman as his pray. People must learn to recognize violence and to abolish silence, which strengthens violence. Abolition of silence and consciousness of people to support victims: this is the main objective of The International Day for the Elimination of Violence against Women which takes place every year on November 25. It was established by UN to commemorate the death of Mirabal sisters, killed in Dominican Republic because of their opposition to dictatorship.

Preventing violence starting from houses. And media must pay attention to words they use: they should never classify feminicide as a crime of passion. There aren’t sentimental alibis to take into consideration. ~ Giorgio Mattarella

Feminicide is a neologism created to make society understand that a real problem exists. The word was used for the first time in Ciudad Juàrez in Mexico, where since 1993 an unknown number of women has been killed and authorities do nothing. It is in this place that the first Zapatos Rojos takes place, a silent march of red shoes that stand for all absent women who should have been there. An art installation by Elina Chauvet to point the finger at the silence around violence on women, an expression of solidarity, of protest all over the world. Who’s talking is Red Shoes, a symbol of joyful femininity, a symbol that stands for the shoes removed from the feet of those women who should have worn them but who, on the contrary, have been killed.  The hope is to make people aware of the existence of violence against women in order to cause a cultural change.

What do we want to convey by celebrating the International Day fot the Elimination of Violence against women?

we want to INCREASE awareness about gender-based violence

We want to PROMOTE a cultural change in society 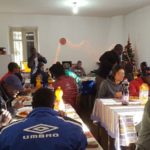